In honor of the upcoming “World War Z” movie adaptation of the book by Max Brooks, I decided to put together this list of other books that taken the most basic premise of the source material and create something totally unrecognizable.

“Blood and Chocolate” (based on the book by Annette Curtis Klause)

Here we have a book & movie about teen werewolves.  And that is where the similarities end.

The film uproots the story from Maryland to Romania.  While Vivian still has a thing for a human named Aiden, in the book he is a high school student who wrote a poem about a werewolf, and in the movie he’s a graphic novel artist.  In the book, Vivian’s mother and another female wolf vie for the attention of Gabriel, the pack leader, who is more interested in Vivian.  When Gabriel wins the leadership of the pack, these two female wolves battle for the position of Gabriel’s mate, but Vivian jumps in and wins the fight when she sees that her mother is going to be killed, making Vivian Gabriel’s mate.  This whole thing is totally dropped from the movie.  Another aspect of the book I liked was that Vivian decides to show her werewolf nature to Aiden, but then he rejects her.  In the movie this is totally reversed.  Aiden goes after Gabriel with the gun, instead of trying to shoot Vivian with the silver bullet.  At the end of the movie, Vivian runs off with the wrong guy.

“The Polar Express” (based on the book by Chris van Allsburg) 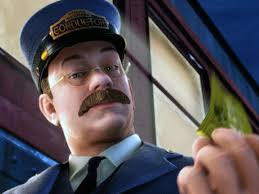 I’m a huge fan of Chris van Allsburg’s books and his artwork.  The Polar Express is a beautiful story about belief, which became a frightening, drawn out shadow of itself as a film.  I mean, did there need to be a near train disaster on route to the North Pole?  Or I don’t know how many other near disasters? Nope.  Did it need to be computer-animated?  Nope.  Computer-animated people just look wrong, especially when they look weirdly like the actor voicing them.  It’s just wrong.  Wrong!

“Queen of the Damned” (based on the book by Anne Rice)

I didn’t have a problem with the “Interview with the Vampire” book-to-movie transition, although Anne Rice did.  And while I enjoyed “Queen of the Damned,” it certainly turned Anne Rice’s opulent writing style into something cheesy.  Stuart Townsend as Lestat – let’s start there.  Somehow Tom Cruise did an awesome job as Lestat in “Interview.”  Stuart a.) did not have Lestat’s blond hair and b.) could not even hope to capture Lestat’s personality as brilliantly as Tom Cruise did.  He comes across as an asshole – albeit a sexy asshole.  You can see the MTV stamp all over this movie, from the casting of Aaliyah as the Queen to the Jonathan Davis soundtrack, making Lestat sound like a Korn-wannabe.  And though the movie sticks with the basic plot of the book, the whole effect is cheapened (although not entirely unwatchable… it is very fun to watch).

“The Vampire Diaries” (based on the series by L.J. Smith)

When I first saw that the CW was making this book series from my high school years into a television series, I figured they were just jumping on the Twilight bandwagon.  I figured this was going to be even worse than the Twilight movies.  At first, the producers kept the basic plot of the first book, where popular Elena falls hard for mysterious Stefan and his brother Damon.  There was actually a diary mentioned.  So Elena’s hair is now brown instead of blonde.  Big deal.

Then, unlike the books, the television series created characters that were 3-dimensional and not total idiots.  I could barely make it through the 4th book in the series it was so dumb.  The TV series, on the other hand, is awesome.  Sure, it has the typical trappings of a CW creation, where the teenagers are all in their mid-twenties and gorgeous.  The change of Stefan & Damon’s origins from Italy to southern plantation didn’t really work for me, but made more sense in the world of the TV series, at least.

So, there’s one transition that was better than its book originator.

One thought on “WTF Book-to-Movie transitions”