It was with a lot of hesitancy that I even watched the “Carrie” remake.  I’m not sure how a director takes a classic horror movie – not a cult horror movie, or one with shitty special effects, but a classic horror movie that was well-received in its time and continues to be well-known and loved – and decides, “I can do better.”  (Ahem, “The Omen”).

Let’s look at the two side by side:

Carrie, the Bullied and Abused Girl:

Which of these girls would you have made fun of high school?  Sissy Spacek just has this weird look.  Chloe Grace Moretz is very conventionally pretty.  You can dress her in weird jumpers and blouses, but Chloe is still pretty.  There was just something so awkward and weird about Sissy Spacek, maybe because she seems so frail.  Let’s face it: Chloe Grace Moretz is Hit Girl from the Kick-Ass movies.  It’s a big stretch for me to see her as a victim of bullying.

Even here, I felt like the acting on Sissy Spacek’s part was so much better.

Carrie at the Prom: 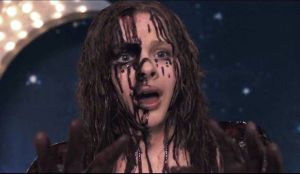 The blood scene is supposed to be shocking.  Carrie goes from suddenly beautiful to suddenly horrifying.  Here, Chloe still somehow looks pretty.  The blood is artfully dribbled on her face.  While the blood is probably more realistic looking than in the original, Sissy’s Carrie looks infinitely more frightening.  And frightened.  She’s watching her life turn into a nightmare.  Chloe looks like she’s just embarrassed.

The “Evil Carrie” look is where Chloe does the best, but she still doesn’t beat Sissy.  With just a few simple snaps of her head and her wide-eyed stare, Sissy’s Carrie brings vengeance down on everyone at that prom.  By the way she holds her body, it is clear that she has completely snapped after a lifetime of bullying and abuse.

The new Carrie, however, takes a more active role and uses her hands to aid her mind in inflicting much more specific punishments upon select classmates.  This Carrie felt much more directed and calculated in her punishments rather than having a total meltdown and wanting everyone to die.  I didn’t find her quite as scary as the original.  I do have to say that throughout the movie, Chloe’s Carrie had quite the evil look as she practiced her telekinesis, but unfortunately that isn’t the intention of the novel.  Carrie isn’t evil; she is turned evil by society.

Moving on to other characters:

The one place place where I felt like the new film failed in its portrayal of Margaret White was in her death.  In the original, Carrie makes knives stab her mother in a way that distinctly mirrors the wounds of the crucified Jesus in Carrie’s “prayer closet.”  The new version does not make this parallel.

Does the face at left resemble any stereotype of a “popular girl” you’ve ever known?  The new film’s Sue, at right, does.  Maybe things were different in 1976.  The only questionable thing about the new Sue is the fact that she’s named Sue.  Not a real popular name for babies in this century.  As far as acting goes, they both played the “nice girl” well.  The new addition of Sue being pregnant at the end and visiting Carrie’s grave doesn’t have anywhere near the effect of the original’s Sue dreaming about visiting Carrie’s grave and giving us that last scare.

No real need for pictures here.  I was a bit surprised that nothing was changed about Miss Desjardin’s reaction to Carrie’s shower room hysterics (slapping her) or about her reprimand to the girls’ bullying (“That was a real shitty thing to do”).  If you’re going to introduce a storyline about cyberbullying to appeal to the audience’s of today, you’re going to have to realize that teachers these days would NEVER get away with either of these reactions.  Granted, Carrie’s mother would never complain to the school board, but I would imagine the parents of any of the other girls would be complaining about a teacher who swore at their precious children.  Sorry state of education these days, but then again, even in 1976 I don’t think teachers were allowed to strike students or swear at them.

Back in the day, William Katt was apparently a hot commodity.  No thank you.  Unfortunately, my first reaction to seeing Ansel Elgort as Tommy was, “It’s Augustus!”  As I watched Ansel’s Tommy Ross try to win Carrie over, I wondered, “Is this how he woos Hazel?”  Neither actor strikes me as being particularly “jocky” and they both still die from being hit in the head with a bucket.  I’ll call this a tie.

Both of these actresses embody different aspects of the traditional mean girl.  Nancy Allen’s mean girl is the pretty blonde who may look pretty but whose interior is so, so ugly.  Portia Doubleday’s mean girl is the updated version – there’s the fake tan, the heavy make up, the trashy clothes.  Both like to party and drink and manipulate people.  One major difference is the maliciousness of 2013 Chris, who jumps in and kills the pig instead of letting her boyfriend do all work.  However, since it isn’t true to the source material and this isn’t a contest of which Chris is more evil, I will call this one is a tie.

The original Billy Nolan was played by John Travolta, so really there is no contest here.  However, as Chris was updated, so was her boyfriend.  This Billy Nolan is more of a dick who doesn’t really respect Chris at all.  I felt like 1976 Chris and Billy were more of a couple, and 2013 Chris and Billy were a bad series of hookups, the sort of couple who cheats on each other and gets back together and breaks up again over and over.  1976 Billy was a heartthrob.  2013 Billy would be a drug dealer.

While the new Carrie tries to update the story for 2013 by adding cyberbullying, special effects, and making the characters appear more 2013-friendly, the overall message, tone, and tension of the original is lost.  The prom scene in the original had so much tension with the music and the jumps between the happy prom, Chris waiting with the bucket, rigging the prom votes, and Miss Desjardin’s mistake of thinking Sue had anything to do with it. The way many of the scenes were framed and shot in the new version just felt completely conventional.  While the actors did their best, acting is not going to save a movie that has all the tension and suspense edited out of it.  The original is clearly the winner!