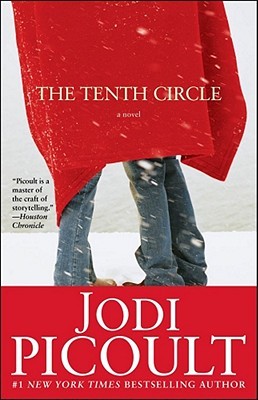 I picked up a copy of this after I went to a book signing for Sing You Home (still haven’t gotten around to reading that one yet…) – one of the fellow librarians I attended with recommended it and I was intrigued when she mentioned that it was partially graphic novel.

This week I attended another book signing for Jodi Picoult, only this time it was more of an event centered around Cassandra Clare, and Jodi was there with her son Kyle to ask Cassandra questions.  It was fun to see Jodi being a bit of a fangirl about the Mortal Instruments, especially since the first time I saw Jodi she was very serious.

I had my max number of books for Cassandra Clare to sign, but when I thought about another book for Jodi to sign, I remembered this one sitting on my shelf and figured a.) I should probably read it since I’ve had for at least 2 years… and b.) I could have her sign it.  As I was waiting in the signing line, I flipped to the front and saw that it appeared that it had already been signed. Feeling sheepish, I went up to Jodi and told her. She laughed and told me it was just a handwriting font, then she signed it to show me what her real signature looked like.

Cassandra Clare was great to listen to.  She talked a bit about her upcoming series – one about the generation after Infernal Devices, although that won’t be out for a while (I’m dying for The Bane Chronicles, which is due out in November).  She talked a lot about how she writes and does research and how she got the idea for the Mortal Instruments series, and also about her favorite relationships and characters.  She was very approachable even though I was still a little tongue-tied when I finally got to the signing table.

I shall finally start reading City of Heavenly Fire tomorrow!