“Vintage” young adult books fall into only a few genres, and I’ve just had the pleasure (?) of reading a few that fit the “Afterschool Special” genre.  This breed of YA is rarely seen for today’s teens.  Reading these books is like being hit over the head with the book’s Very Special Message.

The Wave (1981), written by Todd Strasser under the pen name Morton Rhue, is based on the true story of a classroom experiment that got out of hand.  In teaching his students about how an ordinary person could become involved in the Nazi movement, a teacher institutes “The Wave,” a movement based on discipline, community, and action.  Within a week, the movement spreads beyond the classroom.  Members of The Wave are bullying non-members into joining.

This novel brought to mind some experiments I read about in college, such as the Stanford Prison Experiment and the Milgram Obedience Experiment.  However, the retelling for teens is full of those stock characters you often find in vintage YA.  The main character is the popular and pretty Laurie, dating football star David.  Naturally, Laurie is one of the few who questions The Wave – no one wants to be the drone who buys into The Wave!  The teacher, Mr. Ross, is probably the most three-dimensional character of the lot, unsurprising as it was the original teacher’s story that was mined for the screenplay for the actual afterschool special this book is based on.  Mr. Ross, the “cool teacher,” comes up with this idea and begins to waver between knowing the experiment has gotten out of hand and believing he has created something good.  The ending is especially heavy-handed.

The Very Important Lesson: Nazism is bad, Individualism is good.  Even you can become a Nazi if you don’t think for yourself! 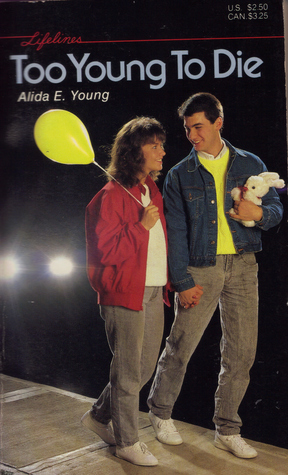 The second Very Special novel I read was Too Young to Die (1987) by Alida E. Young.  Check out this awesomely cheesy cover, which actually depicts a scene in the story!

It seems this story was written as some kind of public service announcement about Students Against Drunk Driving.  That’s the main thrust of the story: popular kid Shane gets hit by a car, driven by a classmate who was drunk driving.  His girlfriend Robin starts a S.A.D.D. chapter at her school and alienates all of her friends in her undying concern for her boyfriend, who lies in a coma in the hospital.  Statistics about drunk driving accidents are spewed.  Months go by.  Eventually she sees that the kid drunk driving, Troy, felt guilty about the whole thing.  Takes her almost the entire book, too.

The most unbelievable part of this story, I thought, was that Robin was only fourteen.  Not to say that a fourteen-year-old couldn’t be so in love with her boyfriend that she sits by his bedside for months.  Part of me – the sarcastic, skeptical part – had Robin pegged from the very beginning as that girl who laid all her hopes and dreams of becoming popular on her boyfriend.  Without Shane, who was she?  Basically no one.  She doesn’t seem to have any of her own interests.  I felt like this was the true reason why she sat by Shane’s bedside all those months.  Ah, well. 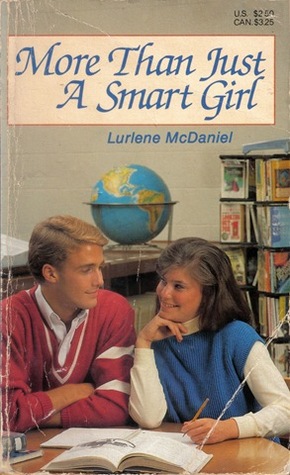 Last, and sort of least, was More Than Just a Smart Girl (1987) by Lurlene McDaniel.  I say least mostly because this wasn’t as heavy-handed as the first two.  But it was still a story about a nice girl who learns a Very Important Lesson.

Alissa is such a smarty-pants she got skipped ahead and now at age 13 she’s starting high school. What’s scary at first turns super awesome when she discovers that Derek, the star football player, is in her study hall and also needs her help with math homework. Soon Alissa is lying to her old fat friend Georgia and to her parents and doing Derek’s homework for him and hoping Derek will realize she’s just as pretty as any of the cheerleaders.

This book was so predictable I laughed a few times. I think everyone in the world could see that Derek was just using Alissa; I mean, she practically begged him to let her do his homework for him. The story is written in such an old-fashioned way that I could have told you exactly how it would end, including Alissa making it up to Georgia and her new friend Casey’s brother Steve showing up to be The Nice Guy. Not only did Alissa learn that she shouldn’t bother putting on make up or dress up for a guy, but Georgia learned an important lesson as well, as she “decided not to be fat anymore” and went on a diet and lost a bunch of weight.

The best part was Alissa’s freak out after she figures out Derek is using her.  Throughout the entire book she’s such a nerdy wallflower and then she basically loses it in the hallway at school.

The Very Important Lesson: Don’t change for a guy.

Sure, these are important lessons to impart to the youth.  Luckily, YA has evolved as a genre so the lessons aren’t *quite* so laughably obvious.