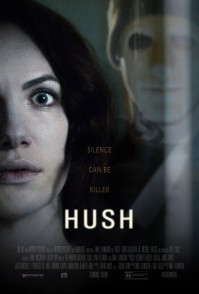 A writer in a secluded cabin is stalked by a vicious madman.  Sounds like a typical horror movie, but here’s the twist: the writer is deaf.  She can’t hear him.

In reading more about this film, I wished the director had been able to carry through his original premise, which was to basically have no audio.  There is a small community of deaf filmmakers out there (I only know because there are several deaf patrons at my library and they have requested these movies).  This would have been great if it had been filmed with a deaf audience in mind.  It was a little disappointing to find that the lead actress was not actually deaf, but this was a low-budget movie made by a husband and wife team, so I can’t be that disappointed that they did not find a deaf actress.  She played the part well, although most of the deaf people I know do speak (quite a lot, actually), and if the character had lost her hearing at age 13 I imagine she would be more inclined to speak, but this is getting nitpicky.

The use of audio (or the places where there was no audio) was the brilliant part of this movie, and what made it so scary.  She can’t hear as the stalker kills her friend right outside the glass door, or listen for where he might be in the house.  She also can’t count on sneaking up on him.  It was also interesting that the killer is never really given a backstory other than the hash marks on his crossbow, presumably the number of people he’s killed.  Other than that, we get no motive for his killing spree.  It’s a simple premise, but surprisingly effective.

Unfortunately, I haven’t seen Wait Until Dark (1967), or I’d probably recommend it, as it is a similar movie only with a blind woman.  And I haven’t seen Don’t Breathe (2016), which turns that movie on its head: a group of thieves break into a blind man’s house to steal his money, and he turns out to be a psychopath and hunts them in the dark.  And I haven’t seen Deafula (1975), which sounds awesome based on the title alone.  And I honestly can’t think of another horror movie with a deaf character.

But really, do I want the recommendations for this list to be centered around disabilities, which is a fairly problematic thing in horror movies and serve only to make female characters into damsels in distress?

So instead, I will include a few of the many stalker-y horror movies out there…

When all the new books come in at the library and you can't stop yourself...