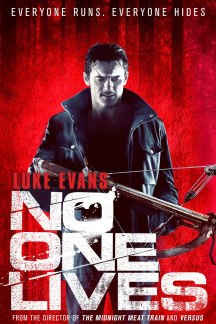 So this movie was quite different from the Netflix description!

Driver and his girlfriend Betty kidnap Emma, a teenage heiress. They’re run off the road by robbers, who discover Emma and are determined to collect the reward for her safe return. But there’s something even more dangerous lurking in the woods.

While I can’t exactly dispute the fact that the heiress is kidnapped, it is said repeatedly throughout the movie that “Driver” does not  have a name.  Is “Driver” just the way the credits refer to him?  And the only thing dangerous lurking in the woods is “Driver.”

The movie begins with Emma, the heiress, dangling from a tree, scratching out a message that says “Emma Alive.”  Flash to 8 months later, and the hunt is still on to find Emma.  At first I thought Driver and Betty were also looking for Emma.  They seem to have an odd relationship even before they are besieged by the robbers – a deadly family of criminals who try not to kill as they rob houses but somehow it happens.  As Driver and Betty are held at machete-point, Betty decides the best option is to cut her own throat on the machete.  This allows Driver the chance to escape and brutally murder the dude with the machete.  Meanwhile, the robbers have stolen their car, but in the trunk they discover Emma, who says that “he” will kill them all.

Thus commences a scenario wherein the bad guys are chased by a worse guy, a guy who is seemingly immortal, with deadly assassin skills.  Driver enjoys killing his victims in extremely brutal ways and there are buckets of gore as well as a lot of psychological cat & mouse stuff.  Much better than I thought it would be!

This isn’t a wholly new concept – here are a few others that are similar: