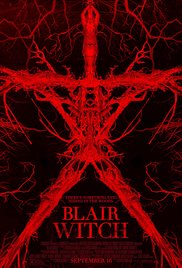 I was one of those people who bought into The Blair Witch Project hook, line, and sinker.  I totally thought it was real documentary footage.  I watch the mockumentary aired on TV about the Blair Witch.  And the whole thing freaked me out.

I felt betrayed when I discovered that it was all a marketing gimmick, but not so betrayed that I didn’t watch Book of Shadows: Blair Witch 2.  In contrast to the first movie’s complete shaky-cam style, this one involved professional filmmaking as well as cameras set up to capture video.

When I saw that another Blair Witch movie was coming out, I thought it was a remake of the original – but it is actually more of a Blair Witch 3.  The brother of Heather from the first movie finds footage on YouTube that suggests his sister might be alive.  With the help of a bunch of friends, including aspiring filmmaker Lisa (I’m pretty sure she’d flunk out of film school based on this footage…) he tracks down the guy who posted the video and convinces him to take them all into the woods to where the footage was filmed.  In addition to the shaky handheld cameras, we also are treated to a drone camera that ends up being useful about once before crashing.

Despite the motion sickness, and what ends up being essentially the same movie as the first – we get the same creepy noises at night, the same stick people appearing in the trees, even the same house at the end and a vaguely similar speech into the camera as “I’m so sorry…” – this premise still has the power to freak me out.  What this movie does have that the original and the sequel don’t is a glimpse of the Blair Witch herself, and it’s quite chilling, especially combined with further information about how the Blair Witch died (which I believe is new, I don’t recall this from the mockumentary).

So, while you can probably watch this movie without having watched any of the others, I’m going to recommend: