It’s been a long time since I talked about the final book in the Wolf Point series, Warriors, mostly because I’ve been hunkered down, working like crazy on it.  And finally it is almost ready!  That’s right, after pushing back the release date about five times, I have finally set an official date.  (And this one won’t get pushed back. I swear.) 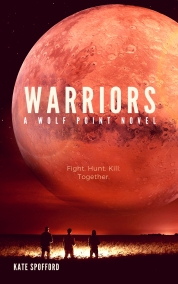 Did you notice how that release date is also a link?  That’s because you can pre-order!  Just for Kindle at this point… this is the first time I’ve done a pre-order and I’m a little nervous about it.

Leading a pack is harder than Kayla could have imagined.  She depends on Remy to help teach the new wolves how to be werewolves, and more and more she questions her role as alpha.  She’s beginning to think it would be better to turn herself over to Geo and his army.

Daniel knows he has a place in the pack–there’s even a prophecy that he’ll save everyone!  But it doesn’t seem like anyone wants him around, not with his anger issues.

As the youngest member of the pack, Zeke wants to help as much as he can.  When he’s relegated to small chores, he decides he’ll have to give himself more responsibility to show everyone what he can do.

They each think they’ll be stronger on their own.  But when the unimaginable happens, each pack member must decide whether they will fight against impossible odds.