I love Sarah Dessen.  She has a lovely variation of the girl-meets-boy, classic teen romance storyline that always keeps me coming back for more.  I haven’t read her newest book, The Moon and More, yet… but I’m sure it will fit this formula!

That Summer, Keeping the Moon, This Lullaby, The Truth About Forever, and Along for the Ride all take place during summer vacation.

Halley from Someone Like You works at Milton’s Market with her best friend Scarlet.

Colie from Keeping the Moon gets a job at the Last Chance diner with Nathan.

Macy from The Truth About Forever works at the library, then gets a job at Wish Catering with Wes.

That Summer – Haven’s parents are divorced and her father is remarrying the local TV weather woman.

Keeping the Moon – Colie’s mom is single and a well-known exercise guru.

This Lullaby – Remy’s deceased father was a famous musician who wrote a song about her. Her mother is a novelist.

Along for the Ride – Auden’s father is a novelist, who has remarried.

Norman (Keeping the Moon) is a long-haired artist whose parents kicked him out of the house; he collects sunglasses.

Dexter (This Lullaby) is in a rock band whose big hit is the song “Potato Opus.”

Wes (The Truth About Forever) is another artist, instead of painting like Norman, he does metal sculpture.

Eli (Along for the Ride) is an insomniac

Toss in a few Easter eggs… 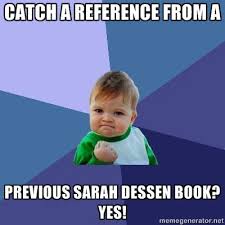 Someone Like You deals with teen pregnancy and death; Dreamland deals with abusive relationships and drug abuse; Just Listen deals with eating disorders and rape; Lock & Key deals with parental neglect; Whatever Happened to Good-bye deals with identity.

All of the above novels take place during the school year.

=a not-too-heavy examination of various social issues, with a hopeful ending

3 thoughts on “The Sarah Dessen formula(s)”