*that I didn’t write

Books about werewolves have a huge advantage over werewolf movies: they don’t have to deal with special effects, which means they can be great without needing a big budget.  That being said, there are a lot of cheesy werewolf books out there (and many of them are in the romance genre…).  This list includes both YA and adult novels. 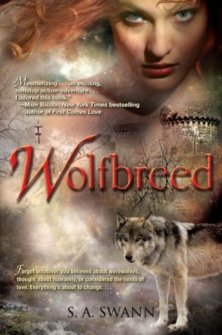 This book deserves a better cover.  I suppose here is where the idea of a budget affects werewolf novels in a similar way as movies.  This seems designed to appeal to fan of paranormal romance, but it’s actually more historical fiction or fantasy.

In the Middle Ages, an order of monks discovers a litter of werewolf pups, and kept them alive to use as weapons of God.  Years later, one of the weapons, Lilly, has escaped.  She’s found by Udolf, a man with one arm, who tries to help her.

I’ve read (or tried to read) other historical werewolf novels, and thus far Wolfbreed is unique for its time frame. 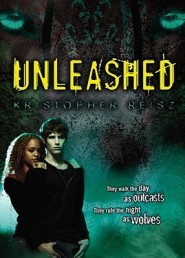 A gritty teen werewolf tale that broke away from the post-Twilight werewolf trend. The story is about more than changing into wolves and having superpowers – it’s about finding your voice rather than being a “hand-licker” or someone who tries to please other people.  If City of Bones by Cassandra Clare had more of a focus on werewolves, it might have made my list, but this novel has that same feel – the urban fantasy, about werewolves living in the city.

Fun fact, I named one of the werewolves in my Wolf Point series Misty based on one of the main characters in Unleashed.  (Another character is named Daniel, but he’s not named after the Daniel in this story).

One of the few true “horror” novels on this list, I had originally bought Overwinter (the second book in this two book series) before realizing I needed to read this one first.

There’s plenty of action as a woman named Cheyenne barely survives a wolf attack and is brought to a man named Powell for help.  When she learns Powell wants to kill her, she runs, and that is when she discovers that Powell is a werewolf, and so is she. 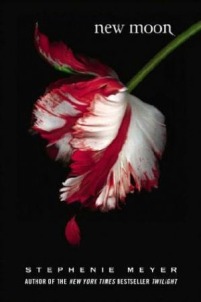 You might think it silly, but I do think the werewolf culture presented in this series is strong and well-developed.  Yes, there has been controversy about this being cultural appropriation, but based on other instances of Native American culture in young adult literature, I find this to be one of the least problematic.

Jacob’s nature as a werewolf is only hinted at in the first book, and it’s New Moon where it becomes central to the plot.  New Moon is also where Edward is MIA and Jacob and Bella’s friendship begins to grow.  Jacob is literally the best part of New Moon, because he pulls Bella out of her months-long catatonia (or moping, as one might call it).

The Alex Awards celebrate adult novels with young adult appeal, and I was a new YA librarian when I heard about this particular book on the list.

Essentially, Sharp Teeth is an epic poem.  Unlike Beowulf or The Odyssey or other epic poems teens are forced to read in high school, this one is about werewolves.  Werewolf poetry is rare, despite some of the earliest works about werewolves being poems (“Bisclavret” by Marie de France was written in the 12th century).  So you get to feel like you’re reading something literary, instead of pulpy. 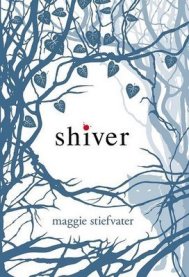 This was the first book I ever read by Maggie Stiefvater and it made me a total convert.  Her writing is poetic without being over the top purple prose, and I loved the idea that these werewolves only changed when it got to be too cold.

I’ll admit that I read this shortly after reading Twilight, and there is a heavy focus on the romance.  But there’s no love triangle, and Grace and Sam are so sweet with each other.  Plus you get to hear both of their perspectives.  In later books, you get to hear from others in the pack, like Isabelle and Cole (who get their own book later in the series).

You’ll hear me gush about Patricia Briggs later in this list, so it might not mean much now for me to say Jennifer Lynn Barnes is like the YA version of Patricia Briggs.

Bryn isn’t a werewolf, but she was raised by a werewolf alpha after he saved her from a werewolf attack.  And she has to work within the pack rules to figure out why everyone’s telling her to stay away from Chase, who was also attacked in a similar way as Bryn herself was.

Another bonus: this is a trilogy, not an endless series – although I would have gladly read more!

Just a note: I’d recommend reading the prequel novella “Alpha & Omega” (contained in the anthology On the Prowl) before reading the first book in this series.

Patricia Briggs has created a wonderfully complex world of werewolves.  Her other series explores the wider world – which includes fae, vampires, witches, and various other paranormal beings.  This series really focuses on werewolf politics and pack structure from the perspective of a werewolf alpha, Charles, seen by most of the werewolf community as an assassin, and Anna, a rare werewolf omega.

Omegas are so rare, in fact, that the pack who turned Anna believed she was simply the lowest of the low in pack order, when instead she’s actually outside the order.  This means Anna was abused in her pack, until Charles saves her.  And it’s their romance and the way they heal each other that makes this series so wonderful. 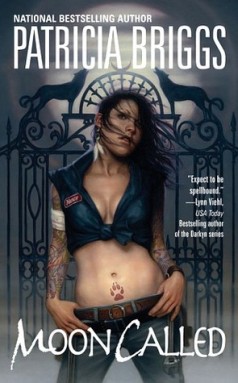 Don’t let this cover fool you.  This is the best werewolf series out there – and thankfully, the covers of the later books move away from the paranormal tramp-stamp aesthetic.

Patricia Briggs builds a fantastic world full of paranormal beings.  Mercy isn’t actually a werewolf, she’s a shapeshifter, but she ended up being raised by werewolves.  More specifically, she was raised by the Marrok, the head of all the werewolf packs in North America.  She is able to sense magic, and has ties to the werewolves through pack bonds, which makes her able to maneuver the many sticky situations she finds herself in.

There’s a ton of folklore in the history of the werewolves, which is explored in Shifting Shadows (a collection of the short stories and novellas based on this world). There’s also some romance, and realistic handling of things like rape and violence.  You don’t have to read this series to read the Alpha & Omega series, but it certainly helps.

The only reason I don’t have this series at the top of my list is because it did take me a while to get a feel for Briggs’ writing style.

This little book is my favorite werewolf novel.  Please, do not watch the movie (or, if you do, know that the movie bears very little resemblance to the book).  Published before the Twilight phenomenon, it’s a young adult story of a female werewolf, Vivian, who falls for a human boy.  What I really loved about this was that it didn’t hold back from exploring the savage lives of werewolves, where Vivian is expected to vie for the alpha’s attention (competing with her own mother), and she’s proud of what she is and expects the boy she loves to love her wolf form too. You’ll have to read it to find out how he reacts, but pretty much everything about this story surprised me.